A controversial figure in the Western world, Mao Zedong stands out from the multitude of national leaders and other historical personalities for hundreds of millions of Chinese people. The legacy of the founder of the People’s Republic of China is revered, thoroughly studied, and passed on from generation to generation.

One chapter in the life story of the Great Helmsman was updated recently as 3D scanning technology was called upon to preserve for posterity the appearance of Chairman Mao’s favorite horse, which was taxidermied soon after it died of old age. 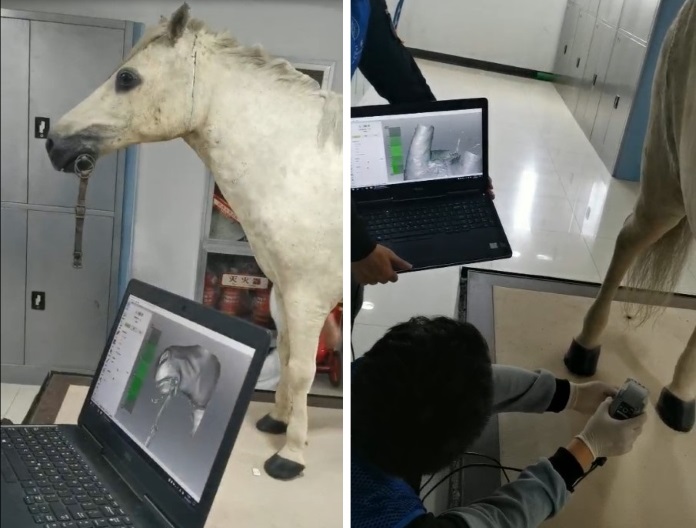 What makes the horse so special?

Legend has it that the horse, nicknamed Little Blue One, saved its owner’s life during the Chinese Civil War (1927-1949). Who knows if modern China would be as it is today if Mao’s horse had made even one move at the wrong moment during a military retreat operation called The Long March (1934-1935)?

One afternoon, as Mao and his comrades were being pursued by rivaling Kuomintang squads, Little Blue One with its owner on its back came to a halt beneath a cliff they were passing by. No one could understand why the horse just refused to budge until they heard a roar coming from afar – a few moments later, enemy fighters whizzed overhead. Thanks to Little Blue One, the party remained unnoticed in the shadow of the cliff. 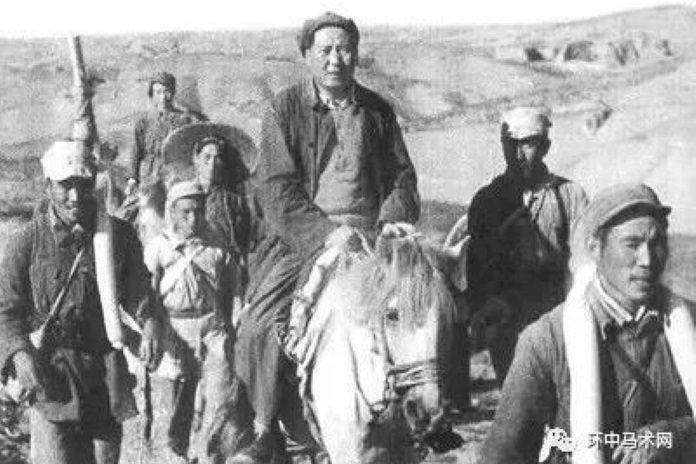 At the end of the Civil War, Mao brought his Little Blue One, a horse with military merits by that time, to Beijing, where it lived out its life in a special enclosure at the Beijing Zoo, until its death in 1962.

Shortly thereafter, the Beijing Museum of Natural History ordered a taxidermy mount of the legendary stallion. Once the job was done, the precious relic was taken to the Revolutionary Memorial Museum in the city of Yan’an, northwestern China, where the Communist Party was headquartered from 1935 to 1947.

With the passage of time, small cracks began to show here and there, threatening to cause the whole mount to fall apart, making the need for urgent restoration truly pressing.

Before embarking on the project, the museum’s administration decided to make a high-precision digital copy of the mount so as to compare its state before and after restoration. The job was commissioned to Artec 3D’s Gold Partner Beijing Onrol Technology Co., Ltd., which had the required expertise in three-dimensional digital archiving.

Every day counted. Scanning needed to take place at the soonest time possible. The Onrol team was given just one day to 3D scan the horse and convert the data collected into an impeccable 3D model.

Attaching targets to the object for better tracking was simply out of the question. Even touching it was prohibited, not to mention using any hardware that could pose a risk to its condition.

It didn’t take much deliberation to choose Artec Eva as the 3D scanning tool for the project. This handheld scanner has been the device of choice for quality control and heritage preservation with companies and institutions ranging from Tesla to the British Museum. 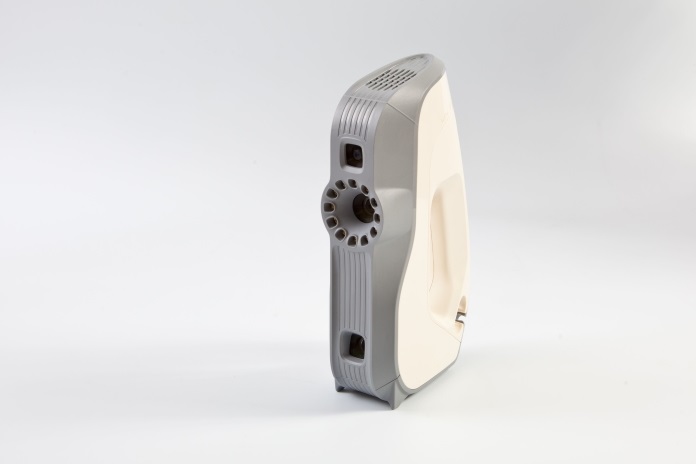 Absolutely safe-to-use, Eva features a flash bulb and a set of LED lights – the same as in lamps found in any room – to project a beam of structured light onto the surface of an object and detect its curves with an accuracy of up to 0.1 mm.

Along with the shape of the object, Eva captures texture with a color depth of 24 bits per pixel, which gives 16+ million color variations – more than the human eye can perceive. Capturing Little Blue One in true color was critically important for the project.

The speed of scanning mattered no less than the quality of the scans. Eva can take up to 16 frames, or snapshots, per second. Each snapshot covers an area approximately the size of an A4 to A3 sheet of paper. This field of view is ideal for working with medium-sized and large objects, such as the horse mount. Moving around the object, the user takes multiple snapshots with their scanner to 3D digitize the entire surface in minimum time while preserving all necessary details.

Ultimately, the scanner is very lightweight (0.9 kg) and easy to handle, which was yet another factor that tilted the scales in Eva’s favor.

On the designated day, the taxidermy mount of Little Blue One was taken to a designated workshop, where Onrol’s scanning specialists performed scanning, one holding the scanner and the other one holding a laptop to which data from the scanner was streamed.

The team used real-time fusion, a tool in Artec Studio 3D scanning and processing software that fuses raw data into scans on the go. In most cases, especially if the object is large and features complex geometry, comprehensive processing is required post-scan, but thanks to real-time fusion, the user can see a preview of the final 3D model on their screen during scanning and immediately understand if the data collected is complete or if some parts of the surface have been missed. Since the possibility of a second scanning session was ruled out, Artec Studio’s real-time fusion played an indispensable role.

Initial processing of raw data was done on-site, taking just a few minutes. After verifying that they had gathered all necessary data, the Onrol team headed back to their office to process the scans into a high-resolution 3D model in Artec Studio. 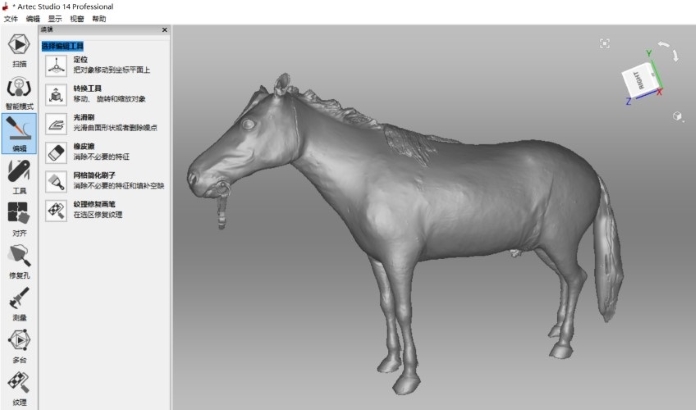 Artec Studio is loaded with an array of powerful features, allowing you, for example, to automatically remove the base the object was scanned on, or organically mend and seal up holes and gaps in your scans. The software even takes care of brightness during scanning, adjusting it so as to avoid overexposure. When does this actually come in handy? If lighting conditions were far from ideal during scanning, you may end up with one side of the object being brighter than the other and then have to spend hours fixing that. With automatic brightness adjustment, there is nothing to worry about.

The finishing touch, texture mapping, was performed at a brisk pace – all thanks to the fact that version 14 of the software, which was used in the project, saw an 800% boost in texture mapping speed.

Now, the 3D model was ready, and its measurements (length, width, and height) were taken.

Obtaining the 3D model of Little Blue One, the museum proceeded with restoration. After it was completed, the mount was 3D scanned with Artec Eva and measured in Artec Studio again. No critical discrepancies were found between the two 3D models of the horse, attesting to the high quality of the restoration job. 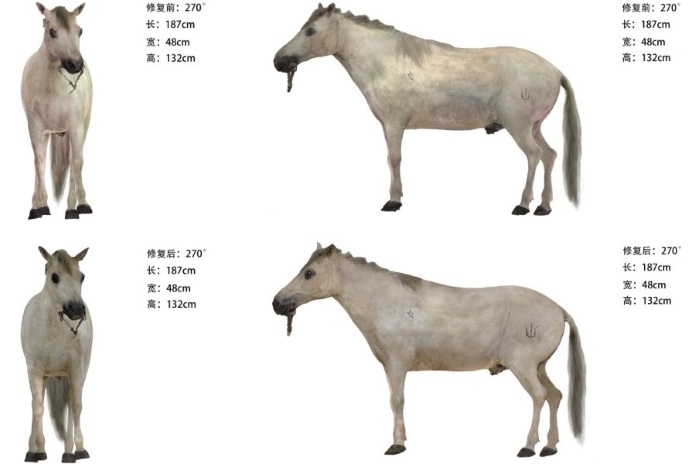 The Onrol scanning team and the museum administration agreed to collaborate further to monitor the state of the restored mount so it can be preserved through centuries ahead.

Timely three-dimensional digitization of precious artifacts is key to conserving cultural heritage and advancing research in anthropology, paleontology, and a number of related fields. If shared or put up online, high-resolution 3D models of artifacts can be accessed by anyone interested in them, regardless of where they are. 3D scanning technology is a straightforward path for creating digital doubles of fossils and specimens at excavation sites, or exhibits in museums, avoiding the need for any physical contact with the object. Ultimately, 3D models can be displayed via interactive virtual reality platforms, expanding museums’ outreach both locally and around the world.